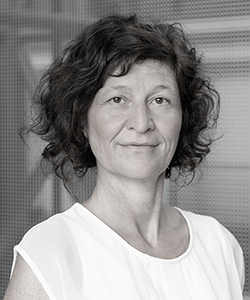 Indira Dupuis holds a doctorate in media and communication studies. In her research she focused in particular on the Eastern European media systems and the political public sphere under conditions of societal transformation. While still studying at the Free University Berlin, she worked in the media sector, amongst others for TV news. After research positions in EU projects in Riga (Latvian University) and Dortmund (Erich Brost Institute for International Journalism), she completed her doctorate at the Ruhr-University Bochum (RUB) on the transnationalisation of the public sphere in Central and Eastern Europe. In addition, she set up an editorial office for audiovisual journalism at the RUB's Institute for Media Studies. Before joining the Work and Environment Foundation of the IGBCE, she realised two research projects at the Free University of Berlin on the role of mass media in the transformation from communism to democratic-market economy societies in Eastern Europe (DFG project) and on the transnational Polish-German public sphere (international cooperation with German and Polish partners). Since February 2020 she has been working for the Work and Environment Foundation of IGBCE.